Within the scope of a semester project, we should develop an autonomous rhythm instrument, which, guided by a clock, outputs sounds and together with other instruments forms an autonomous orchestra.

Our instrument, the BoomBox, consists of a drumstick, which is mounted on an inclined plane, and a cubic sound body. The drumstick beats the top of the sound body and thus generates sound.
The drumstick consists of an elastic tube which is necessary to better transfer the power of the striking arm to the body.

powered by arduino with motorshield 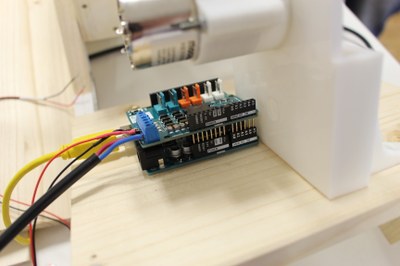 In the picture left you can see the unpainted Boombox without the logo on the front wall. To give it an individual look, we decided to paint the BoomBox black. We lasered out our self-designed logo from the front wall of the sound body. This not only visually enhances the instrument, but also serves a practical purpose. Through the holes, the sound can escape better from the body, which contributes to an improvement in the acoustics. We were inspired by a Cajón which uses the same method for sound optimization.